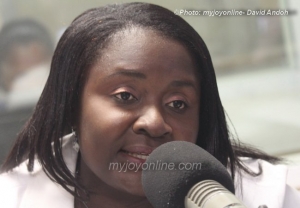 Anti-corruption campaigner Linda Ofori Kwafo has applauded the swift manner in which the Nana Akufo-Addo led government is investigating allegations of corruption in his government.

The Ghana Integrity Initiative Executive Director believes that is the way to go if the fight against corruption in the country will be won.

She was reacting to reports of CID investigations into allegations of corruption by three government officials.

On Wednesday, the Director of Communications at the presidency Eugene Arhin confirmed the president has instructed the CID to seek evidence of corruption allegation from two NPP fire brands Kennedy Agyepong and musician popularly called A Plus.

The Assin Central MP, Kennedy Agyepong has been vehement in accusing the Communications Minister Ursula Owusu of bribery.

As for A Plus he has been vitriolic about his allegations against the two deputy Chiefs of Staff.

Even though he has since apologized for the insults and the procedure he used in pointing out the allegations, A Plus has remained defiant in the substance of the bribery allegations he made against John Jinapor and Asenso-Boakye.

In keeping with the promise to investigate every single allegations made against his appointees, a promise he made at a recent National Delegates Conference held at the Central Region, the president wants his two party members to back their allegations with evidence.

Speaking to Joy News about the development, Madam Ofori Kwafo welcomed the approach.

“I think it is a very good approach. We need to commend the president for this. In the past we heard several allegations of corruption but most of them were not investigated in this transparent manner.

“The approach for me is good. We are looking at government officials to set the right example,” she said.

She was however quick to caution that whistle blowers who want to fight corruption must not go on social media to announce their evidence of corruption.

At the very least, they must go to the appropriate institution to report the matter for investigations to be begin, she added.