NEWS » GII in the News. » Corruption: Nothing wrong with Akufo-Addo defending his team – GII

Corruption: Nothing wrong with Akufo-Addo defending his team – GII 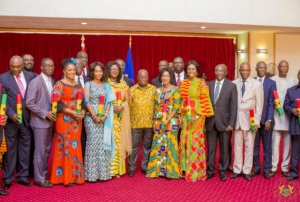 President Akufo-Addo is justified in defending his team over corruption allegations, the Ghana Integrity Initiative has said.

The President told journalists at the Flagstaff  on Wednesday that, his appointees are not corrupt because all allegations against them have failed to stand the test of scrutiny.

“My appointees are not corrupt. I have a greater interest in my appointees not being corrupt than any critic could possibly have. Try me. Produce the evidence to back the allegation, and see what the reaction will be,” he said.

However, the executive director of the GII Linda Ofori-Kwafo said the president was just being confident in his appointees.

Everybody is entitled to an opinion on a matter. I am sure the President wanted to say he is confident in the team he works with and that is why he said his appointees are not corrupt. I believe that any allegation of corruption should have a chance of being investigated. The BOST issue among others can be further investigated by the Special Prosecutor if he’ll want to look at it,” she told Accra based Starr Fm.

She however urged Ghanaians not to be confused about the role of the special prosecutor.

Also contributing to the discussion, a senior Research Fellow at CDD Dr. Kojo Asante commended the President for his interest in the procurement process.

“The President’s statistics on procurement has been a plus. We have to dig into the data to make sure we are getting value for money”