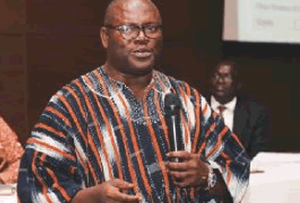 He said money lost through IFFs would have been used to pursue the sub-region’s socio-economic development in line with the SDGs.

The SDGs, officially known as ‘Transforming our world: the 2030 Agenda for Sustainable Development’ is a set of 17 Global Goals with 169 targets.

According to the Global Financial Integrity (GFI) IFFs refer to money that is ‘illegally earned, transferred, or utilised; if it breaks laws in its origin, movement or use it merits the label.

He noted that the structure of West African economies made them vulnerable to IFFs.

Mr Ali-Nakyea made the revelation in his presentation at the 2017 annual World Public Services Day celebration in Accra.

In 2003, the United Nations dedicated the 23rd of June for the commemoration of the annual World Public Services Day.

This year the commemoration focused on the move towards amplifying tax justice campaigns through the unavoidable linkages of social economic contract tax payers and government.

The event was organised by the Ghana Integrity Initiative (GII) in partnership with the Tax Justice Coalition and the Public Service International.

Mr Ali-Nakyea said African countries had remained unchanged for a very long period of time, with unrelenting dependence on agriculture, extraction of natural resources and traditional and basic services.

“Excess dependence on extractive industries for revenue and export earnings in West Africa usually means that the sector is overly exposed to IFFs,” he said.

“Overdependence on this sector for foreign earnings weaken African currencies as most countries are import dependent,” he added.

He said IFFs also reduced tax revenue for the provision of public services such as health and education.

He said IFF reduced forex resources thereby inhibiting growth and the ability of nations to invest in infrastructure and businesses.

He said IFF beneficiaries grew wealthier and were able to exercise greater influence over the polity within the states they operated; adding that “this can curtail the ability of governments to pass transformative policies”.

He explained that when monies were moved out, economies did not benefit from the multiplier effects of the domestic use of such resources, whether for consumption or investment.

He said: “Such lost opportunities impact negatively on growth and ultimately on job creation in Africa.”

“Economic profits on activities performed in West Africa are illicitly transferred out of West African countries, reinvestment and the related expansion by companies are not taking place in West Africa; and reduced tax earnings resulting from hiding taxable funds has a direct effect on the provision of public services such as schools, clinics, sanitation, security, water and social protection.”

He said according to the GFI, 2014 report the cost of fraudulent trade invoicing in five African countries – Ghana, Kenya, Mozambique, Tanzania and Uganda amounted to $14.4 billion in revenue in the 10 years.

He said the study showed that tax authorities in the five countries – lacked the trade, tax and deals data to curb the illicit flows.

He said over- and under-invoicing in the five countries facilitated the illegal inflows or outflows of more than $60 billion during the 10 year period in 2011.

Mr Ali-Nakyea, who is also the Managing Partner, Ali-Nakyea and Associates, cited that ACEP in its February 2015 report on IFFs and the extractive industry in Ghana indicated that cumulative gross illicit flows from trade misinvoicing amounted to $14.39 billion over the 10 year period 2002 to 2011.

He said ACEP again indicated that if the period was taken from 1960 to 2012 then the IFFs through trade misinvoicing amounts to $40 billion; ACEP again estimates IFFs from illegal mining in Ghana in 2013 to be about $1.7 billion.

“Switzerland’s imports of gold from Ghana in 2016 alone amounted to $2 billion. The question is what statistics does Ghana’s data on exports of gold to Switzerland reveal?” he quizzed.

He recommended the need to check collusion between clearing agents and customs officials of revenue authorities.

He said there was the need to keep a database of importers and exporters which will be subject to review to “weed” out dubious ones engaged in trade mispricing.

He said with the greater potential for abuse, trade transactions with secrecy jurisdictions should be treated with the highest level of scrutiny by customs and law enforcement officials.

Mr Frederick Opare-Ansah, the Member of Parliament for Suhum, and a Member of the African Parliamentarians Network on Illicit Financial Flows and Tax (APNIFFT), said the Network had the desire and commitment to spearhead the fight against illicit financial flows in Africa.

He said APIFFT’s main aim was to provide a platform for African legislators to undertake sustained advocacy- related dialogue and debate in a simplified manner on IFFs, tax governance and domestic resource mobilisation.

Mrs Linda Ofori-Kwafo, the Executive Director of the GII, said the commemoration of the World Public Services Day was to deepen workers and the public’s understanding of tax justice and its direct connection with efficient delivery of public services.

She said there was a global push for multi-national companies to pay their fair share of tax to fund quality public services and sustainable economic development.