NEWS » GII in the News. » Abuse of incumbency and electoral Corruption 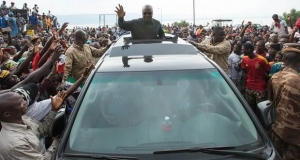 The unbridled use of state resources placed at the disposal of the President under the 1992 Republican Constitution is mitigated only by the honesty, patriotism and good sense of judgment of the part of the incumbent President, since Parliament which should provide a ‘whipping rod” to put the Presidency in check has failed woefully in this direction. Since the onset of the “Fourth Republic”, persons occupying the exalted position of the Executive have virtually abused their power of incumbency to raid the state covers to illegally use state resources to prosecute the election campaigns of their presidency and their parties. The result is that immediately after elections, the national coffers are declared depleted.

The worst situation occurred during the 2012 elections when the economy was left in a state of near collapse and had to resort to the IMF for a bailout. This was as a result of massive spending funds towards the election bid of President John Dramani Mahama.

The election season is here with us again and just as in the past, President Mahama has embarked on what he calls: “Accounting to the People Tour”, describing it as a mere official tour of the country to inspect and showcase the many projects undertaken by his government. In his own words, President Mahama states: “I have not started campaigning yet. After the launch of the NDC campaign I will come back and I will be in full political battle dress”.

Indeed, in the words of Dr. Paa Kwesi Nduom, founder and leader of the PPP, President Mahama’s tour is just a campaign trip running on tax payer’s money.  Peter Mac Manu, the Campaign Manager of the NPP on his part has accused President John Mahama of “abusing incumbency” with his “accounting to the people” tour.  Also, the CPP’s Kadir Abdul Rauf has described the tour as a funfair and a jamboree aimed at soliciting for votes.

The impression among the citizenry is that this year’s election is going to be a make or break one, a mother of all elections surpassing any elections so far held in this country. Tensions are mounting partly fuelled by the perception and believe held by sections of the opposition parties that the Electoral Commission is unwilling to give the opposition a listening ear while appearing to bend to the views of the governing NDC.

The unfavourable economic situation has seriously affected funding to state institutions and thereby crippling their operations with rippling effect on other sectors of the economy and the standard of living of the citizens.  With high level of unemployment and spiralling cost of living, interest in the coming election among the citizens is unusually high fuelling the tension that is being felt in the country. The unity of the nation is at stake.

GII holds the view that much as an incumbent president has the responsibility to govern the country as per the Directive Principle of State Policy of the 1992 Republican Constitution, it is incumbent on President Mahama to interpret and implement that Directive to foster national unity and harmony. One critical way of achieving this on the part of the incumbent president is to avoid any act which could be seen as an abuse of the power of incumbency, either perception or real by drawing a clear line between official trips and unofficial trips such as country tours. Periodic trips to the regions of the country by an incumbent president are necessary. However the timing, the organisation and the statements made on such visits should not be carried out to create the perception that they are deliberately planned as campaign visits to canvas for votes or gain unfair advantage over the opposition parties which could be interpreted as to an abuse of incumbency.

The use of state resources and properties like cars, planes, employees, etc. at the disposal of an incumbent president  as campaign resources or using state machinery like the security agencies to coerce the opposing parties and individuals  or outlawing politically dissenting views or rigging elections through vote buying  are all clear cases of abuse of incumbency

In 2012, GII developed a manual and indicators for measuring what constitutes abuse of incumbency. These indicators include but not limited to abuse of public functions and platforms, access to public facilities, use of state funded projects to solicit for votes etc.

The Ghana Integrity Initiative holds the position that in as far as the President Mahama is appealing to his audience to give him a second term in office to continue the projects he is inspecting and inaugurating or cutting sod for commencement as happened in the recent past and as far as the gathering, his transport to the various regions, the security personnel and accompanying Ministers of State are all state sponsored then the “Accounting to the People” tour is an abuse of incumbency. President John Dramani Mahama has the responsibility to the nation to avoid all acts which can be interpreted as abuse of incumbency, especially, acts which involve the use of state resources for private gain. GII is particularly pleased with the comments of the president calling for a national debate on the issue. We therefore us this platform to encourage all stakeholders in the governance of this great nation of ours to come together to critically assess the issues and come up with clear recommendations to improve fairness and equity in our electoral process.