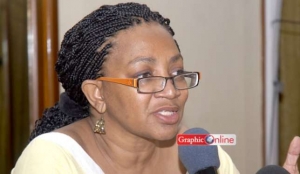 The Ghana Integrity Initiative has demanded the Mahama-led administration and the Judiciary to speed up investigations on allegations of impropriety by CHRAJ commissioner, Ms. Lauretta Vanderpuijie. Ms Vanderpuijie was suspended eight months ago after the chief justice set up a five member committee to investigate the case.

The Anti-graft body Ghana Integrity Initiative had earlier asked Ms Lamptey to step aside voluntarily for investigations to be made into the saga. However, speaking on citi fm's eyewitness news, the executive director of GII, Mr. Vitus Azeem said it is rather unfortunate that eight years down the line, the five member committee which was tasked to investigate the matter is yet to submit a conclusive report on the investigations.

“ The issues that have been endorsed. What actions have been taken? How long should we wait for actions to be taken. Once we have accepted some of thew actions, should we continue to wait?

This governmentt in various manifestos has assured Ghanaians of a transparent and fair governance. Transparency means providing info on a timely basis, especially when the info affects the lives and the people of the country. So what we are saying is that when there is an investigation, and the media discusses it for a week and we all forget about it, it doesn't help in promoting transparency. And also those affected whether positively or negatively are being denied of he results of the investigations”, he said.

In recent times, the John Mahama-led administration has yielded to pressures to investigate allegations of corruption and other types of malfeasance against various public officers. These investigations included the Judgment Debt Commission, the Brazil 2014 Commission, EOCO investigations into the operations of GYEEDA and the so-called investigations into the Subah Info Solutions saga, among others. The pressures for action have often come from civil society organizations, the media, social commentators and a cross section of citizens across the political divide interested in promoting transparency and accountability.

However, most of these Commissions of Inquiry have taken longer than expected to carry out their investigations, often for no obvious reason. Even when the delayed investigations have finally been completed and the reports submitted, it takes a lot more time to take action on the recommendations of these Commissions. Sometimes, no action is taken at all on the recommendations and public officers that have been indicted remain in their positions, monies stolen remain unrecovered and recommended prosecutions never take place. Furthermore, citizens whose hard earned money is used to pay for the costs of these investigations never get to see the reports of these commissions due to the lack of transparency and openness that underline such investigative processes. This raises a lot of questions and concerns.

The inaction by the President on reports of Commissions of Inquiry and other investigations may be attributed to several factors, including political pressures from party financiers and faithfuls who are indicted. Pressures may also come from involvement of people high up in the party or government who feel threatened by further revelations if action is taken against the indicted officers or who feel that their indicted tribesmen should not be penalized for the improprieties or possible benefits of the ruling party from the improprieties.

It is unacceptable for any arm f government to yield to political pressures when it comes to addressing governance issues but it is even worse when citizens perceive the Judiciary to yield to such pressures or even fall victim to other factors such as corruption in its various forms. Following the allegations of impropriety by the Commissioner of the Commission for Human Rights and Administrative Justice (CHRAJ), Ms Lauretta V. Lamptey, and a formal complaint made against her, President John Dramani Mahama, “on the advice of the Judicial Council and pursuant to Article 146 (10) (b) of the 1992 Constitution of Ghana, suspended from office, Ms. Lauretta V. Lamptey, Commissioner for the Commission on Human Rights & Administrative Justice (CHRAJ).” The statement suspending her stated that “the suspension follows the establishment of a prima facie case against Ms. Lamptey by the Chief Justice and the setting up of a five (5)-member committee to investigate complaints made against her.” This seems to have been all that most Ghanaians heard about the case.

Many Ghanaians saw this as a sign of adherence to the Rule of Law and expected prompt investigation of the matter so that justice will not only be seen to be delivered but actually delivered. However, eight months down the year, nothing has been heard from the Committee or the Chief Justice. The continued silence of the Committee and the Chief Justice on the matter seems to be telling Ghanaians that the Judiciary could be going down the same lane as the Executive. The Committee was set up because justice needed to be served and the Commissioner needed to be given the chance to be heard. However, the long silence is worrying and many Ghanaians may give different interpretations to this silence. But whatever interpretations people give to this silence, the Commissioner, on her part, and the Ghanaian tax payers deserve justice and the silence on the matter does not serve this purpose. It is often said “Justice Delayed is Justice Denied” and this seems to be the position with this case

If Ms. Lauretta V. Lamptey has been cleared, she should be restored to her position as the Commissioner of CHRAJ and if she has been found guilty, the necessary sanctions should apply. Justice cannot afford to be delayed, especially by the Judiciary.

As part of its anti-corruption mandate, GII, therefore, calls on the Chief Justice to display the independence and the incorruptible nature of Ghana’s Judiciary by releasing the report if it is ready or by informing Ghanaians why the investigations have still not been concluded. This is the only way to go if the Judiciary hopes to maintain its credibility.