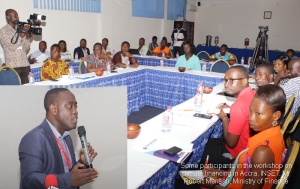 The Ministry of Finance (MoF) is pitching for an estimated $320 million from the Green Climate Fund (GCF) to finance three national climate change response projects.

The projects, Ghana Sheanuts Scheme REDD Plus, Climate Resilience Land Scheme for Sustainable Livelihoods and a national solar project, are part of the country’s resilience efforts towards climate change.

An official of the Natural Environment and Climate Change Unit of the Real Sector Division, MoF, Mr Robert Mensah, said this at a Climate Finance Integrity Talks forum organised by the Ghana Integrity Initiative (GII) and its international partner, Transparency International (TI), in Accra yesterday.

TI and GII organised the meeting under the Climate Financing Integrity and Anti-corruption Programme.

Funded by the European Union (EU), the effort brings together about seven African countries, including Ghana, to promote transparency in the administration of funds for climate change to prevent corruption.

The Forestry Commission submitted the sheanuts projects, the Ministry of Food and Agriculture is promoting the land scheme project, with the Energy Commission pushing the expanded solar project.

Climate finance
In a presentation on the Climate Finance Tracking Initiative of the MoF, Mr Mensah emphasised that the ministry was merely facilitating the sourcing of funds for the projects.

He said within the climate finance regime in the country, the ministry was charged with the coordination and supervision of all funds devoted to climate resilience efforts.

In keeping with that mandate, he said, they had developed a climate finance tracking tool to help track the government’s expenditure in climate change initiatives.

It was also helping in reporting better the country’s commitment towards climate change mitigation and adaptation activities to the international community.

Within that framework, Mr Mensah said about GH¢638 million had been tracked as being used by ministries, departments and agencies in 2014 on various climate change activities and projects.

Institutions
Mr Mensah said the MoF had set up a committee made up of public and private agencies that was diligently scrutinising Ghana’s effort for the country to succeed in their bid for the funds.

He said so far, a readiness support fund under the GCF was what was being accessed to build the capacity of the country in sourcing the funds.

He urged Ghanaians with innovative ideas on climate change mitigation not to hesitate to submit proposals to the ministry for review and to facilitate the sourcing of international funds.

Mr Mensah gave an assurance that the membership of the committee set up at the ministry to look into proposals for international funding was such that corruption would not occur.

Information
The Coordinator of KASA Initiative, a civil society organisation, Mr Kwame Mensah, taking participants through the Role of Civil Society in Climate Financing Integrity urged all to get the requisite information on the sources of funding for climate change.

Armed with that, he was of the view that the right questions could be posed for accountability.

A Programmes Manager of GII, Mrs Mary A. Addah, said the climate financing talks initiative would be held across the country for all to be abreast of the issues.