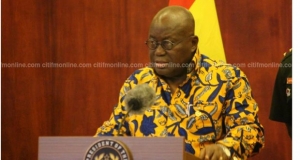 President Akufo-Addo may lose the good will he is currently enjoying from Ghanaians if he fails to act swiftly to deal with some of the corruptions cases that have hit his administration.

This is the assertion of the Executive Director of the Ghana Integrity Initiative (GII) Linda Ofori Kwafo. At a round-table discussion on good corporate governance organized by Krif Ghana Limited, the US Ambassador to Ghana called for a swift passage of the law for the Office of the Special Prosecutor to regain the confidence of foreign investors.

Ofori Kwafo argued that Ghanaians cannot wait for the passage of the Bill before corrupt acts are punished.

“Seriously if care is not taken, the goodwill with which the President convinced many Ghanaians to vote for him on the grounds of dealing with the canker will be lost. I say so because the action must be now. We have to see something happening. We believe in the law, we believe in the framework.

Meanwhile US Ambassador to Ghana, Robert P. Jackson at the same event called for a speedy establishment of the Special Prosecutor office to deal with corruption in Ghana.

Ambassador Jackson noted that the instance of corruption in Ghana is keeping most foreign investors away hence his suggestion.

“The President has talked about the importance of creating the right environment and making this a business friendly environment…We will like to see some follow up. I will like to see the Special Prosecutor Office established. I think this will send an important signal to him. I will like to say the people who were involved in the Central Medical Stores fire prosecuted. I think that will also send an important signal…Foreign companies I know are looking for the President to show that things are changing. That there is going to be a new approach,” Mr. Jackson said.

The Special Prosecutor office is to enable the government deal with various corruption issues in government.

It was one of the major proposals made by President Akufo-Addo as part of his plans to deal with corruption in government.